Note: Hat-tip to The Electronic Intifada for some of the factual material included here

The British government’s blatant attempts to exploit the murder in France of the Charlie Hebdo staff and the other killings associated with it are both sinister in their implications, staggeringly hypocritical, and virulently racist in their own right. While Theresa May talks about the need to ‘wipe out anti-semitism’, David Cameron condemns the liberal Pope Francis as being too soft on Muslims who are outraged by pornographic depictions of Mohammad in Charlie Hebdo, and issues his own Downing Street encyclical on the ‘right to be offensive’ to Muslims (but not to Jews, obviously).

This reflects official practice: Muslim-baiting in this country has state-sanction, but not just bigotry against people of Jewish origin per se  (which is reprehensible, but very marginal today), but also meaningful criticism of Jewish/Israeli racism against Arabs and Muslim people, or expressing appropriate, even though non-violent, anger against Israel and those who support it’s crimes against Arabs,  is to be stigmatised and persecuted.

In fact, the equation that government ideologues on both sides of the Channel are making, between ‘anti-semitism’ in the previous century, and such events as the siege of the kosher supermarket at the end of the Hebdo affair, are also mendacious. Such indefensible actions are the product of anger at Israeli crimes, which are done in the name of all Jews even as most Jews internationally return the identification. Thus such targeting is similar to attacks on Americans abroad for the crimes of the United States, which also happens now and again. Such actions are vengeful, reactionary and to be condemned, but the equation of them with pre-war genocidal anti-Jewish racism and Hitler is a lie. In fact, the anti-Muslim hatred being stirred up today by supporters of imperialism and  Zionism much more closely resembles those things.

As was revealed even before the  Hebdo attack, toddlers – undoubtedly this will be those from Muslim parents that the government have in mind –  are to be spied on at nurseries by staff in case they express any ‘anti-semitic’ views. This means using toddlers to spy on the political views of their parents, in a manner reminiscent of the McCarthy era in the United States, when schoolkids were taught that ‘if your mommy is a commie, turn her in’. Though they did not tend to pick them quite so young in those days!

This reflects the will of the ruling class: the Conservative Party, the main party of capital in this country, is dominated by its ‘Friends of Israel’ faction, which claims the allegiance of 80% of Conservative MPs. The other two main parties are similarly dominated by equivalent racist trends, whose purpose is to foment support for Israeli ethnocracy and legitimise the practice of ethnic cleansing of Arab people in the Middle East, which has been the core of the Zionist project for many decades.

Meanwhile, notwithstanding the fact that the perpetrators of the Charlie Hebdo killings had been known to French intelligence for a decade, the government claims that it needs the legal right to spy on the internet activity of every single man, woman and child. This is aimed to legalise practices that have been going on for years anyway, as Edward Snowden revealed in 2013, but which are currently legally highly dubious. This never had anything to do with protecting the public from terrorism.

In France, we are seeing many bizarre and Orwellian prosecutions of people who refuse to grovel to the neocon-dominated Socialist Party in government and who have dared even to satirise the grotesque hypocrisy that the Charlie Hebdo murders have set in motion. Such as a mass state-sponsored rally supposedly for for ‘free speech’ and against violence addressed by mass murdering racists like Netanyahu, or pro-Western dictators like Egypt’s Sisi, whose phoney courts have sentenced hundreds to death for defending Egypt’s only elected president, Mohammad Morsi. He himself is now on trial for ‘terrorism’-related nonsense charges, even as Sisi’s predecessor tyrant Mubarak is acquitted by the same courts.

People who attack this hypocrisy are being legally persecuted in France. One example of someone being prosecuted blatantly for exercising ‘free speech’ is an 16 year old boy who appears to have posted the fake Charlie Hebdo cover shown here, 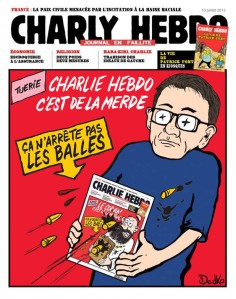 16 year-old boy arrested because of this satire. Text reads “Charlie Hebdo is shit … it cannot stop bullets’. But it is a satire of …. 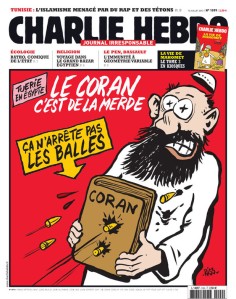 … this issue of the actual Charlie Hebdo. It’s caption reads “The Koran is shit – it cannot stop bullets’. Hypocrisy incarnate!!!

and has thus been bizarrely accused of defending ‘terrorism’. This drawing was obviously a satire of a foul anti-Muslim cartoon by the original Charlie Hebdo, that blatantly mocked and rejoiced in the killing of Muslim Brotherhood supporters (i.e. supporters of the elected government of Egypt) by the Sisi dictatorship, crudely pointing out the Qur’an could not defend them against Sisi’s bullets.

The satire similarly pointed out that likewise, Charlie Hebdo also could not defend its editors against Al Qa’eda’s bullets. And if you look closely, the issue of Charlie Hebdo that the editor is using to try to protect himself has the original foul cover of the magazine it was parodying.

This is actually a clever piece of satire. In fact it looks a good deal cleverer than Charlie Hebdo itself. Its not clear who the author of the graphic is at this point: it could have been the arrested youth, it could have been the comedian Dieudonné M’Bala M’Bala, who also published this cartoon and has also been arrested and charged with ‘defending terrorism’ by the French state as a supposed defender of ‘terrorism’ for a different but obviously ironical and mocking statement he made about the French state’s hypocrisy regarding free speech.

In France, just as after 9/11, neocons are exploiting this indefensible action to launch a wholesale attack upon democratic rights and free speech, ironically under cover of a defence of free speech. The left and the working class movement generally needs to defend the democratic rights of all those being persecuted in this crackdown, and in particular to stand up against the use of mendacious accusations of ‘anti-semitism’ to justify attacks, by totalitarian-inclined neocons and Zionists, on democratic rights, which threaten the entire working class.