The last week or so has seen a sudden change in the political atmosphere in Europe (including the UK) on migrants and refugees. A progressive shift seems to have happened, originating in part from below.

The bloody dead end of the Syrian Civil War, with both main forces, that of Assad and of Islamic State, engaging in atrocities and scaring the hell out of much of the civilian population, has augmented the already large numbers fleeing from Libya, bloody local dictatorships such as Eritrea, as well as other conflict zones derived from imperialism’s wars such as Afghanistan and Iraq and the Palestine/Israel conflict. Other major refugee flows around the world include the flight of Rohingya Muslims from racist/religious persecution in Theravada Buddhist Myanmar; though this is perhaps somewhat remote from immediate mass interest in Europe.

END_OF_DOCUMENT_TOKEN_TO_BE_REPLACED

This is the leading article in Communist Explorations,  no 2 (Spring-Summer 2015). It is partly adapted from an earlier article on the immediate post-election situation, but contains much newer analysis.

The anti-austerity demonstration on 20th June takes place after a historic defeat for the working class in the UK, which last May’s general election outcome represented. There has already been a beginning to social protest by youthful sections of the working class against the new Tory government. The 4000 strong London demonstration on May 9th, which was unsurprisingly pushed around by the cops, demonstrated that.  The advent of a unalloyed Tory government, minus the discarded and destroyed Nick Clegg and his Lib Dems, whose project is to declare war against all of the remnants of social security and post-WWII gains of the working class that Thatcher failed to smash in her offensive in the 1980s, as well as against migrants and refugees, will force the working class to fight back.

It is imperative to resist the new Tory government both in terms of economic struggle and on the political level. Political resistance is even more crucial than merely ‘economic’ resistance, as without a political movement behind them that is capable of addressing all the problems of society and all ruling class political stratagems, and putting the political arguments for solidarity to the entire working class, economic struggles will likely be left isolated as they have been in the past.

END_OF_DOCUMENT_TOKEN_TO_BE_REPLACED

The following leaflet was distributed at a London dayschool of HOPI this afternoon. A fuller report of some of the discussions at this meeting will be posted when time allows. But this content of the leaflet speaks for itself in terms of the politics of HOPI’s initators, the Communist Party of Great Britain/Weekly Worker.

This day-school of Hands off the People of Iran (HOPI) epitomises the politics of its initiators, the CPGB/Weekly Worker.  A body dedicated to solidarity with the working class in Iran is in principle a good, if narrow, project.

The working class of the entire Middle East needs solidarity in many ways, against imperialist aggression and despotic and dictatorial regimes, pro-Western and ‘radical’. That Iran, not even its working class, but its ‘people’ is singled out as more deserving than elsewhere, reflects the CPGB’s ‘third camp’ ideology that treats ‘radical’ bourgeois regimes targeted by imperialism as co-equal with the imperialists themselves.

END_OF_DOCUMENT_TOKEN_TO_BE_REPLACED 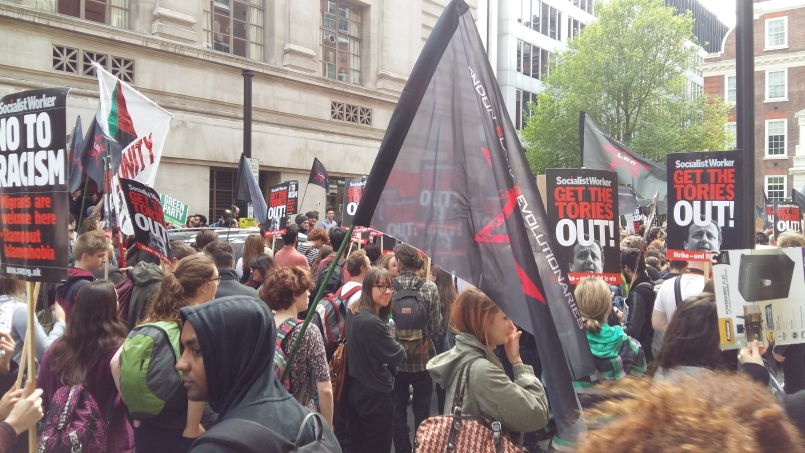 May 9th Protest in London against Cameron’s new Tory regime

The outcome of last Thursday’s general election victory represented an historic defeat for the working class in the UK. That seems like a startling statement, as it was only a parliamentary election after all, and the class struggle is not won by electioneering. That is a Marxist truism that is worth bearing in mind in most circumstances. But sometimes election results highlight trends on the ground in a very dramatic manner.

There has already been a beginning to social protest by youthful sections of the working class, against the new Tory government. The 4000 strong London demonstration on May 9th, which was unsurprisingly pushed around by the cops, demonstrated that.  The advent of a unalloyed Tory government, minus the discarded and destroyed Nick Clegg and his Lib Dems, whose project is to declare war against all of the remnants of social security and post-WWII gains of the working class that Thatcher failed to smash in her offensive in the 1980s, as well as against migrants and refugees, will force the working class to fight back. But we had better be aware of the real significance of current events on the relationship of class forces, as part of preparing the working class on a wider level to resist.

END_OF_DOCUMENT_TOKEN_TO_BE_REPLACED

Ten years ago, the working class and oppressed of Tower Hamlets, including many of Muslim/South Asian migrant descent or background, struck an important political blow at imperialism and the Iraq War. They did this by electing George Galloway as MP for Bethnal Green and Bow in the 2005 General Election, for the left-wing anti-war RESPECT party.

That was very alarming to the rulers of this country, because Galloway had been expelled from Labour for taking a heroic position on the Iraq War, effectively calling for the Arab world to resist the Bush/Blair-led imperialist invasion by force.

END_OF_DOCUMENT_TOKEN_TO_BE_REPLACED

The current General Election is taking place in conditions where British politics is in a state of more flux and fragmentation than not only in the lifetimes of those generations alive today, but also of previous generations. In some ways it is unprecedented: there are no apposite comparisons in the history of British capitalism. Both major parties, the Conservatives and Labour, are at such historically low levels of popularity that it is hard to imagine that either of them are likely to be able to achieve an overall majority in parliament even though we have an undemocratic first-past-the-post system that is biased to giving the party with a plurality of votes a crushing, undemocratic overall majority in parliament. It could not be absolutely ruled out that either party might just make it as a result of some event stampeding voters in either direction, but it is not something most people would like to take a bet on.

END_OF_DOCUMENT_TOKEN_TO_BE_REPLACED

The following statement appeared on Left Unity’s website about the blatant attack by the Coalition government on the right to residents of Tower Hamlets to elect a council and Mayor that these hypocritical racists disapprove of.

It is worth noting, that Pickles, like most of his parliamentary cohorts in the Tory Party, and many Lib-Dems as well, is a supporter of the ‘Friends of Israel’ faction within his party, which in the Tories embraces 80% of Tory MPs.

This attack on democracy is somewhat reminiscent of the attitude of the Israeli government when, in some semi-democratic body, Palestinians elect politicians the Zionists disapprove of.

“Eric Pickles has abused his powers and revealed a contempt for the democratic vote in Tower Hamlets by sending in three commissioners to oversee the council’s actions.

“The audit, demanded by local Labour MPs who feel threatened by the success of mayor Lutfur Rahman’s Tower Hamlets First in the local elections, has found no evidence of criminality or fraud.

END_OF_DOCUMENT_TOKEN_TO_BE_REPLACED

The narrow defeat of the Scottish independence referendum was seen as a relief by the core of the British ruling class. But in a sense, it is a relief for partisans of the working class also. To the superficially minded, this may seem illogical or incongruous. How can what seems like a victory for the core of the ruling class not be a defeat for the working class? A pointer to this is contained in a salient point once made by the Russian Revolutionary leader Leon Trotsky:

“In ninety cases out of a hundred the workers actually place a minus sign where the bourgeoisie places a plus sign. In ten cases however they are forced to fix the same sign as the bourgeoisie but with their own seal, in which is expressed their mistrust of the bourgeoisie. The policy of the proletariat is not at all automatically derived from the policy of the bourgeoisie, bearing only the opposite sign – this would make every sectarian a master strategist; no, the revolutionary party must each time orient itself independently in the internal as well as the external situation, arriving at those decisions which correspond best to the interests of the proletariat.” (Learn To Think: A Friendly Suggestion to Certain Ultra-Leftists, May 1938)

The British ruling class, in its dotage in terms of capitalist de-development and decline, is no longer able to guarantee the coherence of its own national state in the face of centrifugal nationalist forces, including some within its own class, and faces a real possibility of state fragmentation. This might be true, but that does not make it a progressive development.